The best European cuisines are found deep in the nooks of the continent’s most iconic and exceptionally hidden countries. Here’s a list of what to expect when journeying to find the best food in Europe. 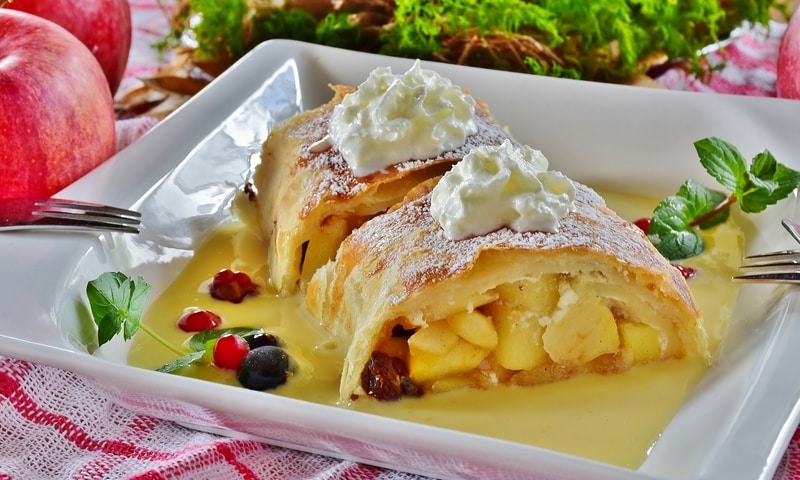 The small but seasoned country of Austria is embroidered with the finest mountain ranges and slopes that enthrall and entertain extreme-sport enthusiasts. It also serves as a popular holiday destination for many globetrotters who seek to fill their adventures with a burst of culture, architecture, and historical artifacts.

But that’s not all you’ll need to look forward to in this landlocked country. There’s also the famous apple strudel or apfelstrudel. This sweet treat has traveled throughout local parts of Europe and scintillated the taste buds of all who have relished the crisp, soft dough with cream and apple filling.

A must-try for all who find themselves craving a sugar rush after a long day of exploring the vast Rocklands of the country. 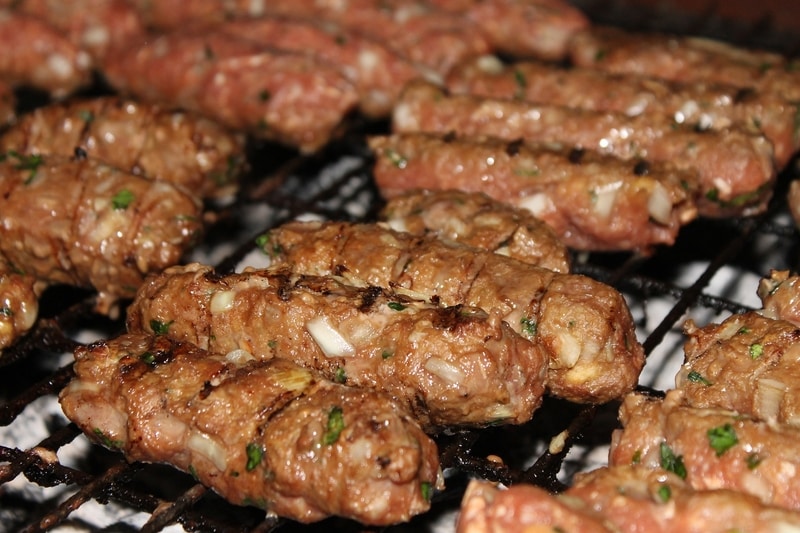 The multiethnic country of Bosnia and Herzegovina has been subdued to immense political pressure over the years. This follows the national and international wars that have come and gone throughout the centuries.

However, this has contributed to the vast and culturally-rich textures in this country. These qualities have equally crossed over into the local and traditional cuisines that have been birthed from this independent country.

One local favorite is the national Cevapi dish, which is grilled, skinless sausages made of either beef, veal, pork, or lamb and served with flatbread, chopped onion, creamy kajmak cheese, and avar. It’s a taste sensation that is well worth the introduction. 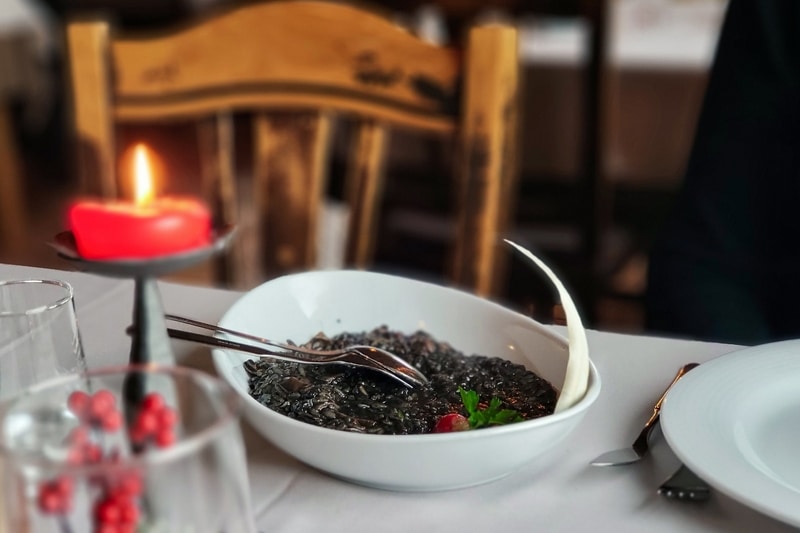 The Mediterranean country of Croatia is famous for its scenic beauty and architectural brilliance. But it’s also known as one of the safest countries in the world, far surpassing both the UK and the US with their 19th place ranking.

This leaves plenty of room to venture around this supposed King’s Landing from the popular Game of Thrones series. See if you recognize any of the landmarks situated in Dubrovnik city.

It’s no wonder then that the go-to meal on this island of curiosity is black risotto, also known as cuttlefish risotto.

This dark delicacy can be enjoyed on its own or as a scrumptious blend of cuttlefish, squid, garlic, red wine, olive oil, with the magic ingredient, squid ink. Yes, your teeth will turn black, but we guarantee that you will never turn back after this hearty meal. 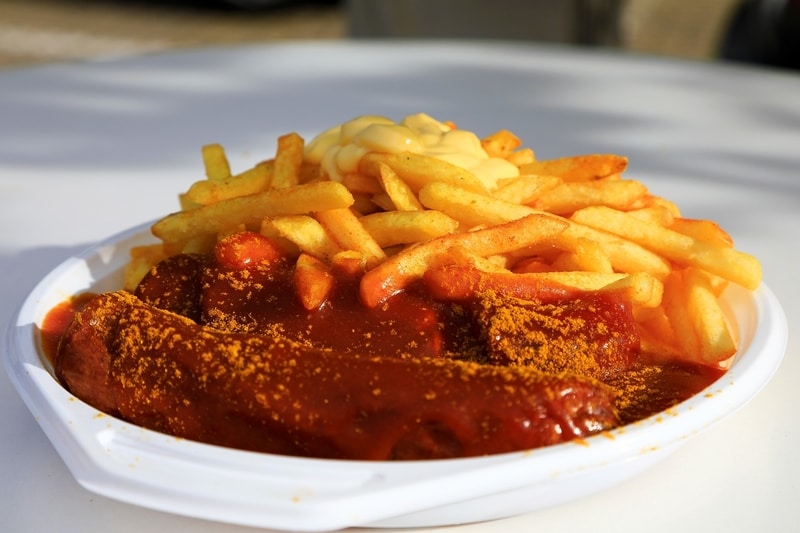 There’s no denying that Germany is a famous, yet bravado country when looking at the rich history that makes up this land. One might not expect to find an air of simplicity in the most prominent and most substantial economy in Europe. Yet, you might be delighted to find that their taste buds are just like most of the world’s, if not slightly better.

The German currywurst extends the variety of sausages we’ve come to know this country for, such as liverwurst and bratwurst.

This version, however, consists of a fried pork sausage that is either served whole or cut into bite-sized pieces. Then it is drizzled over with a curry ketchup sauce and lightly seasoned with some curry spice.

The final topping to this delicious local favorite is none other than a plate full of french fries, which is probably why this dish is such a fan favorite. 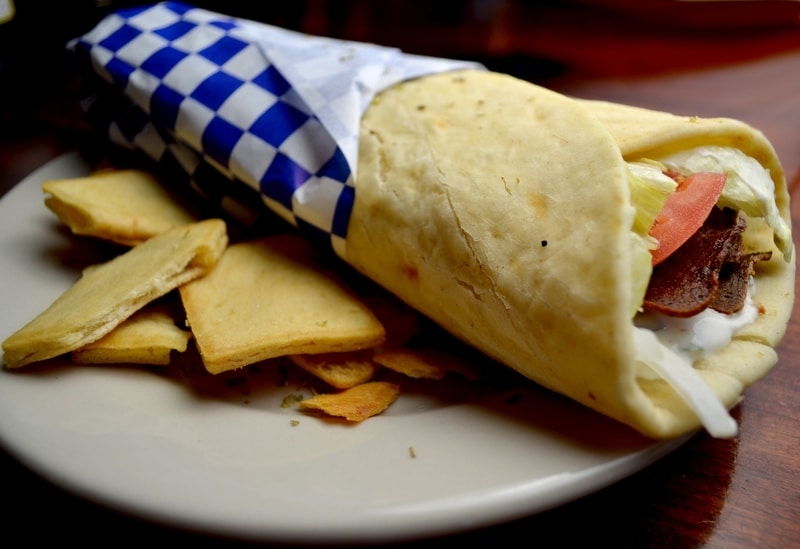 Greece is one of the most prominent countries in Europe because it preserves the culture and heritage that the country was built on.

The ancient and classical architecture and scenic views of Greece clearly indicate the anticipation and fascination that globetrotters have around this country.

One of these fascinations is the food, of course. The gyros or gyro is a greek-style wrap made with flatbread, rotisserie meat consisting of either lamb, beef, or even chicken. It gets topped off with some creamy tzatziki sauce (made with yogurt and cucumber).

This local street food is a flavor bomb that is sure to impress even the pickiest palates. 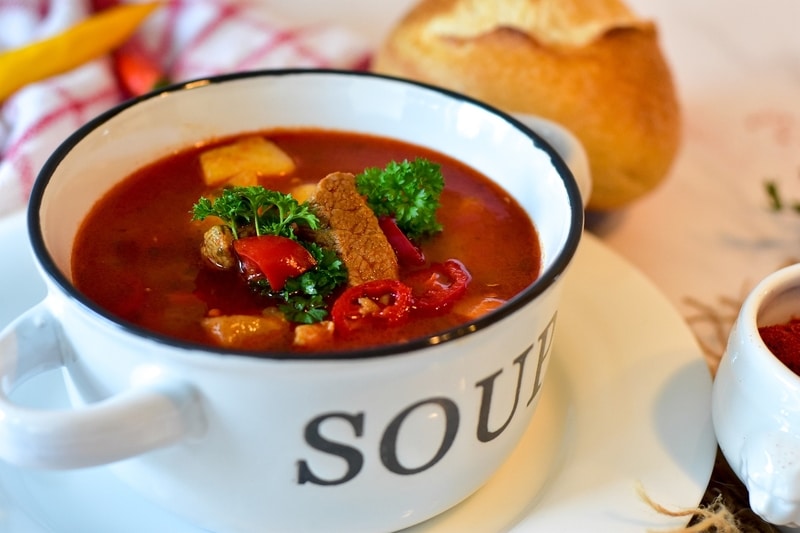 The landlocked country of Hungary hosts the largest lake, Lake Balaton, and the most popular city in Central Europe, Budapest. This exotic destination is star-studded with the most scenic and relaxing mineral spas that have garnered quite a bit of popularity over the years.

There’s nothing more calming than the ease of a day well-spent exploring a few of the roughly 1 500 spas that Hungary boasts. Then sneaking away from your long massages to enjoy a hearty meal of beef goulash at one of the local hotspots.

The Hungarians are said to have a thing for red powders, and this wholesome stew, mingled with tomatoes, carrots, potatoes, and garlic, is generously seasoned with paprika and red chili, among other well-rounded flavors, to showcase the heat and vigor that you’re likely to find in this beloved country. 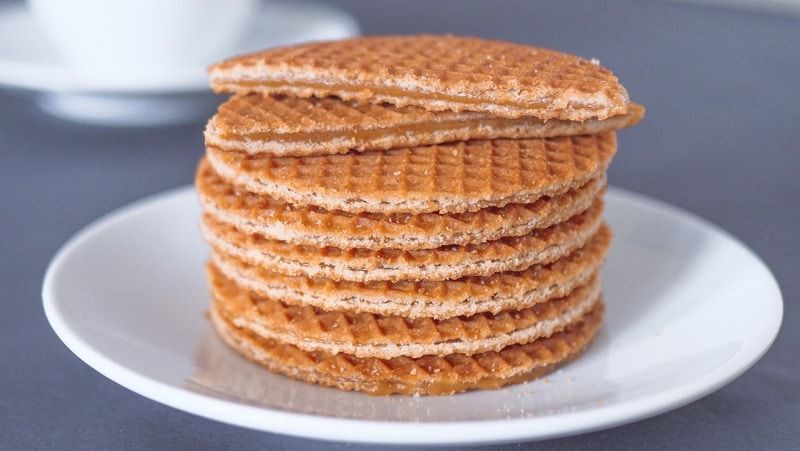 The quaint country of Holland, officially regarded as the Netherlands, is a country that favors cycling routes, wild fields of tulips, and the tonal whines of windmills.

This country is as tranquil as its surroundings. Even though its capital city, Amsterdam, is notoriously known as a stoner’s paradise, there’s another kind of high that continues to excite these Nederlanders.

Enter the local waffle cookie, stroopwafel. This sweet, sticky, and crunchy delicacy consists of a decadent layer of caramel, chocolate, or honey sauce. The sauce is sandwiched between two thinly-layered, wafer-like cookies and served on top of a warm cup of tea or black coffee.

This underrated waffle may contrast the famous Belgian waffle’s light and airy variation, but there’s still plenty of magic to be found in every bite. 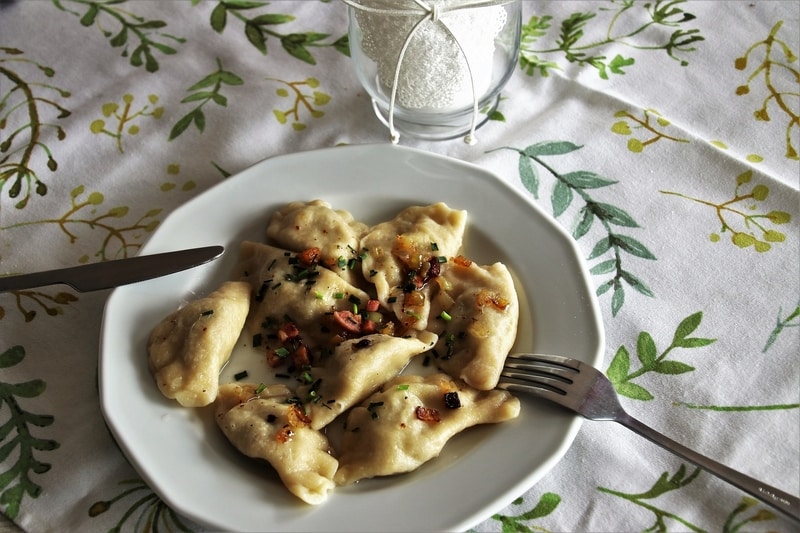 Poland is one of those overlooked and undervalued European countries, even though they have quite a lot to offer. There’s a great deal of heritage to be discovered in this fun-loving country, from the world’s most giant stately castles to the world’s oldest salt mines. You’ll even find the origins of the celebrated hard liquor we now call vodka.

One traditional meal that is a definite must-try while on your expedition is the pierogi. This unleavened-dough dumpling is quite a treat in many Eastern European countries, and a variety of sweet and savory fillings sum up this local cuisine.

The locals usually enjoy it filled with potatoes, sauerkraut, ground beef, fried onions, and cheese. Of course, you’re welcome to try out your own variations as they come along too! 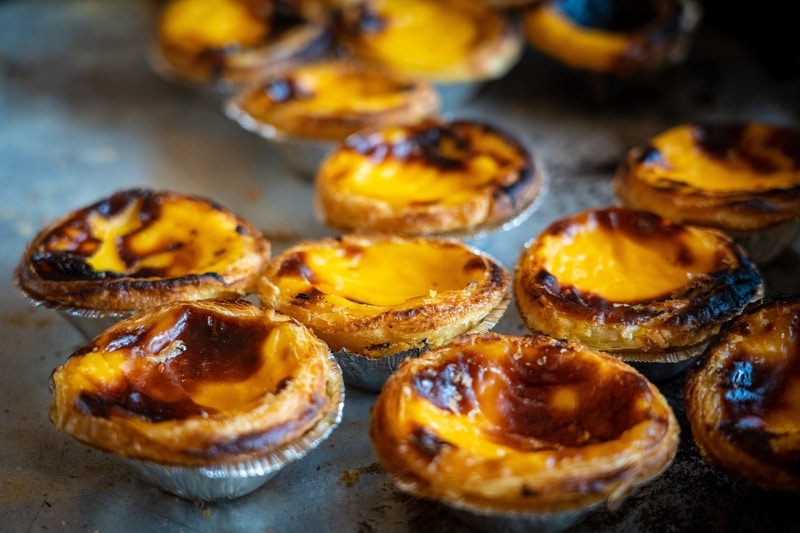 The vibrant country of Portugal is one of the oldest nation-states in Europe and arguably one of the most peaceful countries that you’ll find on this list. The scenic island view of Portugal boasts a mix of 16th and 19th-century architecture, perfect blends of port wine, esteemed soccer players, and cultural excellence.

However, the best-kept secret of this luxurious island is one that originated in the heart of Portugal. This secret is the iconic Portuguese custard tart, locally known as pasties de Nata.

These delectable puff pastries are filled with rich egg custard, covered in a crisp crust, and sprinkled with some nutmeg. All before enduring a smoldering oven of about 800°F.

The pasteis de Nata have remained at the centerpiece of Portugal’s chronicles since they were first made in the 1800s. These desserts are unmatched and unforgettable: even history says so. 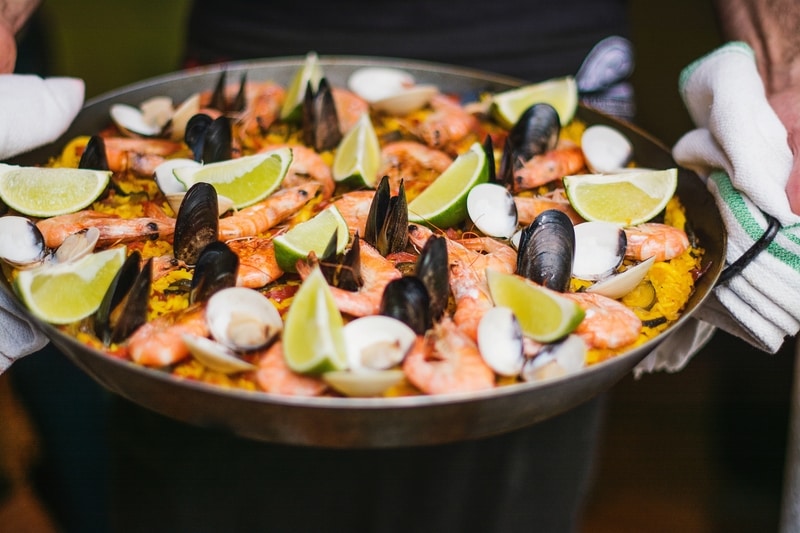 Spain is undoubtedly one of the most visited tourist destinations in Europe, and this comes as no surprise. The blue seas and sandy beaches are nothing compared to the radical nightlife that cities like Ibiza have captured local tourists with.

There’s so much to do and see in Spain that eventually you’re going to need some energy to lift your spirits. And what better to do that than the exotic seafood paella that praises the fisheries found on this island country.

This beloved Mediterranean dish is a rice-based pan dish infused with saffron and assembled with whatever toppings you fancy. From mussels, prawns, clams, tomatoes, peas, or beans, nothing is off-limits.

The variations are endless, and there are meat and vegetarian options as well, so there’s absolutely no reason not to try it!

Switzerland is commonly associated with staying neutral in heated political situations. But one thing we can guarantee you is that there’s nothing neutral about this mountainous Central European country.

The Swiss are creative and edgy. This artistry has made the Swiss popular for the finer things in life: creamy cheese, decadent chocolate, luxury branded watches, army knives, and the most beautiful scenery.

The most natural cuisine to try in these parts is their famous cheese fondue. This national dish consists of using long-stemmed forks to dip various pieces of bread and meats into a pot of hot, creamy cheeses of your choosing.

This is an absolute delight among the locals, and it’s guaranteed to make you smile. Can you say cheese?

The best food in Europe can be found in the heart of each country’s love for traditional meals. The cuisines featured are only a fraction of the classical foods that you can enjoy in Europe. There’s a new flavor for every palate, whether it’s breakfast, lunch, dinner, or dessert.

The only tip we can give you is: Pack your comfy clothes for this trip!

Cheap Things to Do in London | 5 Best Budget-friendly Activities

Lisbon to Nazare | Bus, Train & Car Options + Things to Do

Lisbon to Obidos | Ways to Get There, Travel Time & More