Your Fun Guide to Disneyland Paris

With magical lands, a host of iconic characters and awesome rides, Disneyland in Paris is a destination that must be on your bucket list. Welcoming millions of visitors every year, the Magical Kingdom never fails to excite! It is one of the most famous attractions in Paris, other than the iconic Eiffel Tower.

Some say “Disneyland Paris”, while others call it “Euro Disney”. But so long as you mention Paris, France or Europe, you’re all talking about the same magical place.

Before we get onto the best parts, let’s share some wonderful tidbits of Disneyland history. The theme park opened as Euro Disney in 1992 and has welcomed over 250 million visitors since then! Over the years, the park has added a Walt Disney Studio park and welcomed some exciting new characters and attractions.

With our fun guide to Disneyland Paris, you’ll have an experience so breathtaking and immersive that you may feel like you’ve stepped into your favorite Disney film!

The 6 Best Attractions at Euro Disneyland

With magical characters and exciting rides, Disneyland, France offers you all the joy and laughter you could possibly want! The Magical Kingdom is split into various sections or “magical lands”, each boasting some fantastic attractions. To avoid getting lost, make sure that you get a Disneyland, Paris map. 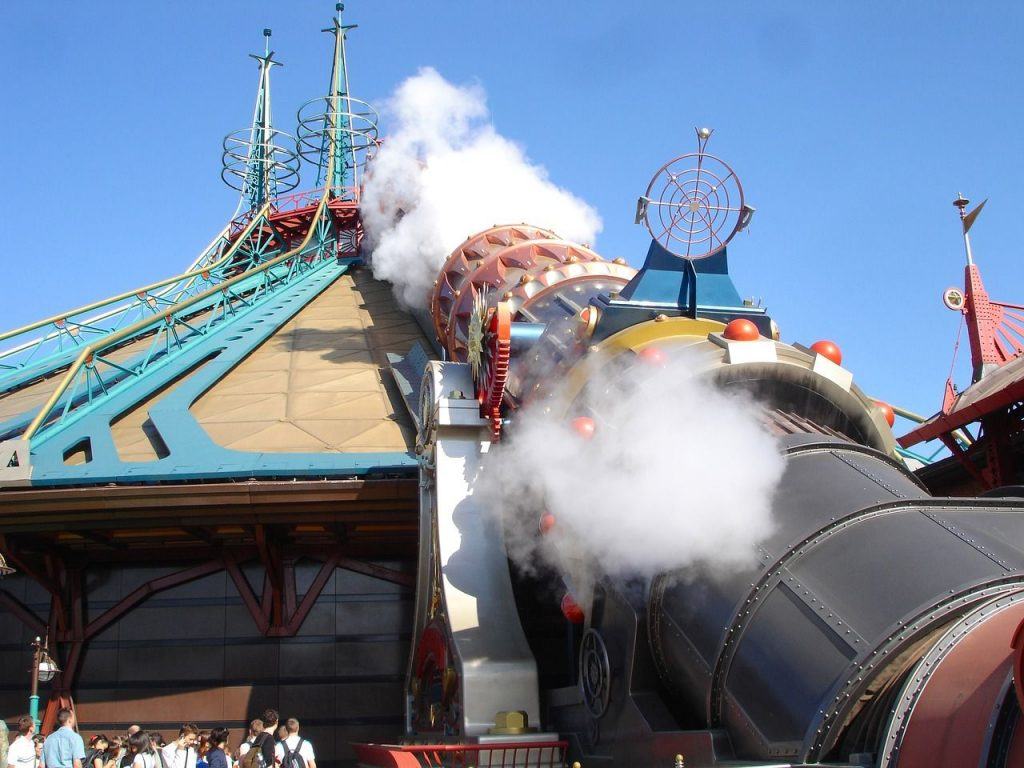 This land is a reproduction of a typical American small town. The life-sized street is complete with vintage-style stores and gas-lit arcades. You can even take a carriage ride down the Main Street.

In the arcades, you can learn about the creation of the iconic Statue of Liberty, as well as some fascinating 19th-century inventions! Main Street U.S.A. also hosts the classic parade of most-loved Disney characters.

The Disneyland Paris rides in Frontierland are all about the Wild West. The highlight is the ride up to Big Thunder Mountain in a bumpy mine-cart, which will take you through a deserted mine town. It will give you a big thrill!

There’s also the spooky Phantom Manor. It’s home to ghosts and spirits who make the portraits move and the corridors shake!

To calm down your nerves after all that excitement, take a vintage paddleboat from Thunder Mesa Riverboat Landing and explore the caves along the Rivers of the Far West. 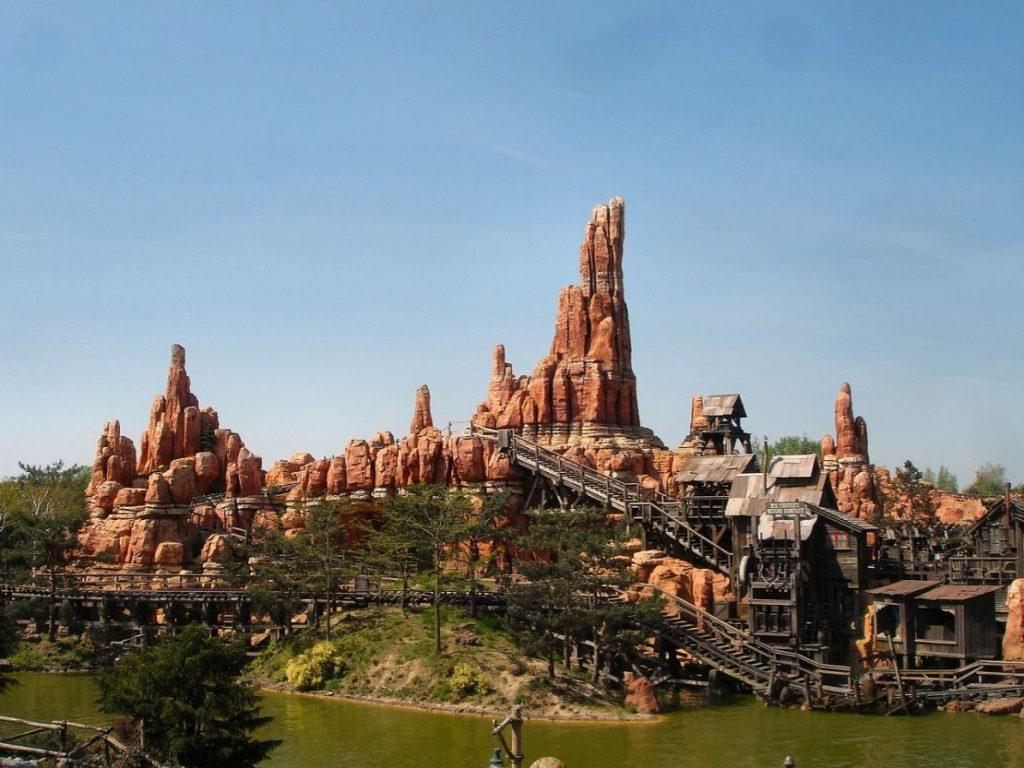 If Indiana Jones and Pirates of the Caribbean were your favorite movies, then Adventureland is your playground! With a rickety cart ride to the Temple of Peril and a trip through a Spanish fortress, there are lots of games and rides to enjoy.

At Adventure Isle, you can explore the pirates’ lairs and board a Pirate Galleon. For lunch, head over to Captain Jack’s – Restaurant des Pirates for a rustic meal with the pirates! 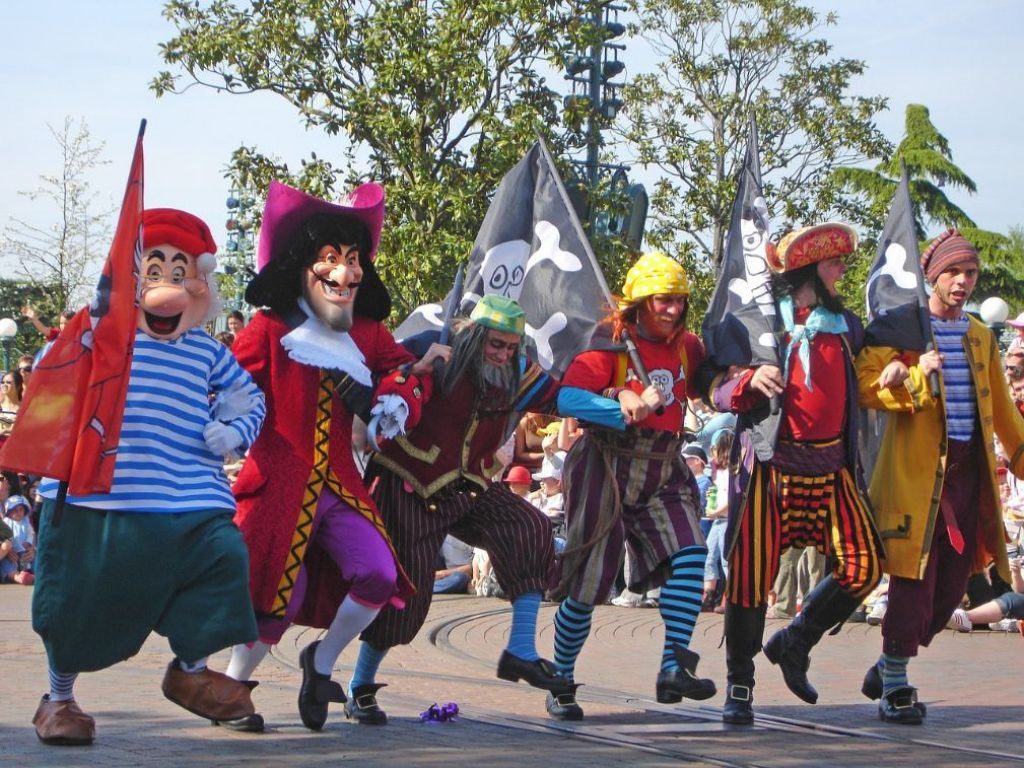 Fantasyland is probably the most famous part of Disneyland in Paris. It’s a medieval village that’s home to all the magical Disney princesses!

Anna, Elsa, Cinderella, Snow White and more are all waiting to meet you at the Princess Pavilion. Sleeping Beauty’s Palace, the iconic castle, is the centerpiece of the entire Paris Disney so be sure to admire the stained glass windows and climb the spiraling staircases!

Discoveryland is how Disneyland Paris, France, brings space to your fingertips! Whether it’s exploring the worlds of Star Wars or Toy Story, there’s a lot to discover.

There’s a ride through the world of Star Wars that includes a visit to Planet Endor. You can also join an asteroid battle between the Rebel Alliance and the evil Empire, as well as control your very own spaceship! 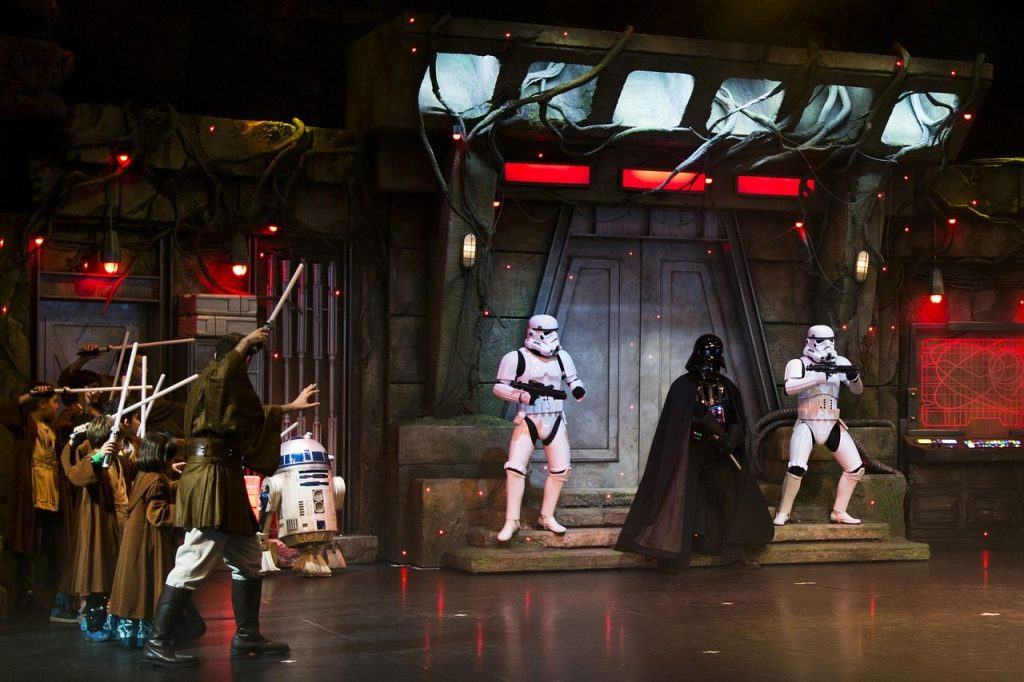 Image by Marco Santiago from Pixabay

Walt Disney Studios Park has several sections, each of which explores a different area of production. It’s a great place to visit if you want to learn more about how your favorite characters are brought to the screen.

The park houses recreations of famous sets, as well as technology that shows how animations are made. Between meeting Nemo at the bottom of the ocean and shrinking to the size of a Toy Story Character, you will make some incredible memories! 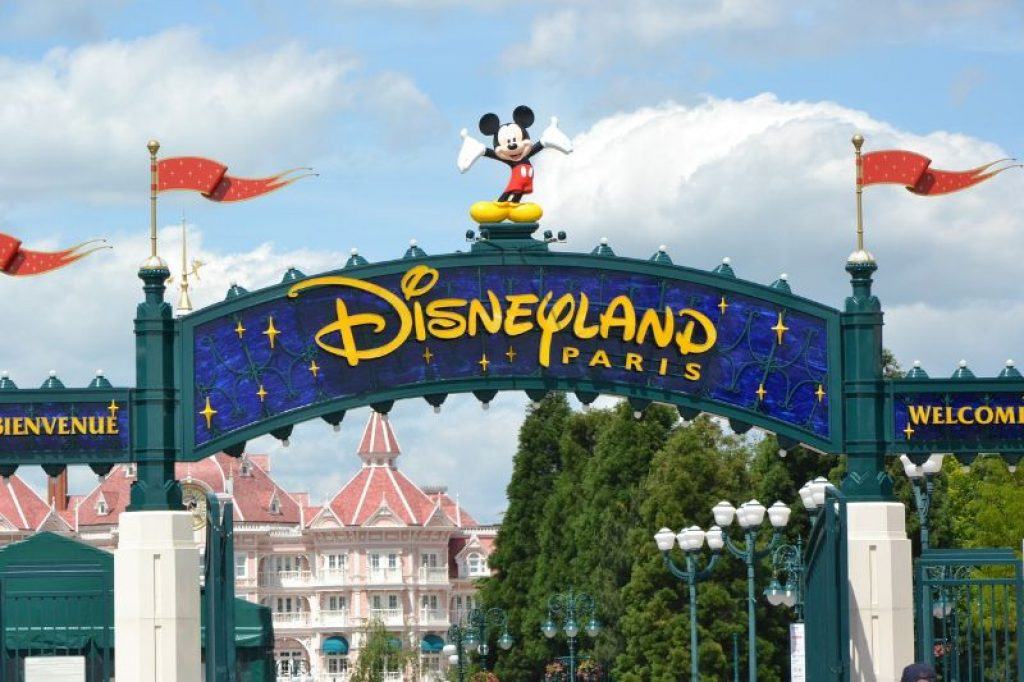 Image by bunzellisa from Pixabay

If you’re in a rush, Disneyland Paris offers three kinds of tickets to make your day trip quick and convenient.

If you book at least a day in advance, you can save up as much as €27 ($30 USD)! It’s also cheaper to go during the week and outside of the school holidays.

You can also book a ticket that includes a shuttle trip from various areas in Paris.

The longer you spend at Disneyland Paris, the cheaper the daily rate! You can choose between 2,3 and 4-day pass options. This is the best option for diehard fans.

Disneyland is an incredibly popular attraction and you will never have the park to yourself so gear up for super long lines. If this sounds like too much for you, buy a skip-the-line Fastpass in addition to your Disney Paris tickets.

If you’re short on time and only have one day in Disneyland, but have money to spare, buy a Fastpass so that you can see as much as possible.

Warning: This ticket does not include entry into Disneyland Paris. It is something you buy in addition to your entrance ticket to ensure you skip the long lines. 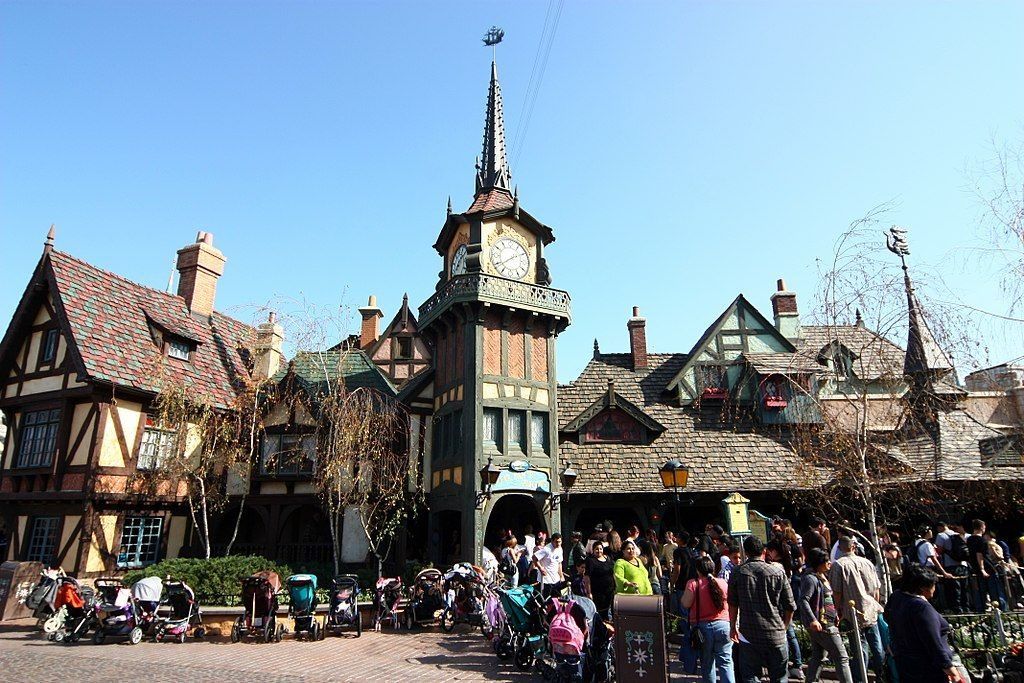 If you’re visiting the Magical Kingdom on special holidays like New Year’s Eve or Halloween, it’s a wonderful idea to purchase Disneyland Paris tickets to special shows and parties!

For Halloween, the park rides are open till after midnight and infamous Disney villains roam the streets! On New Year’s Eve, meanwhile, you will be dazzled by the fireworks lighting up Sleeping Beauty’s Palace.

Warning: This ticket does not include entry into Disneyland Paris. It is something you buy in addition to your entrance ticket. 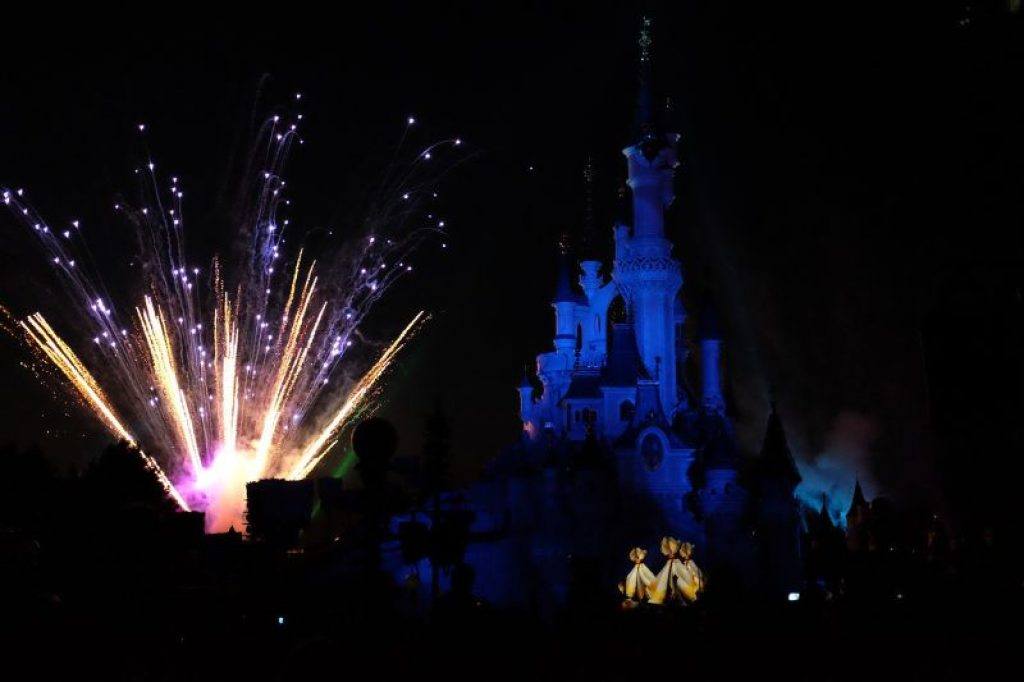 Image by Frederic Willocq from Pixabay

Getting To and Around Paris Disneyland

How big is Disneyland Paris? Big. 34 hectares, to be precise.

However, you will mostly need to walk from one attraction to another. There is the Disneyland Railroad, which stops at all the lands around the park. But since most people treat this as a ride, it’s not a quick way of getting around.

To get to Disneyland Europe, you can take the RER A train from the center of Paris. This takes just 35 minutes and is cheaper than taking a shuttle bus.

If you’re staying in a Disney hotel, you can make use of the free shuttle bus to get to and from the park. However, this service does not include Disney’s Davy Crockett Ranch. Many non-Disney hotels also offer a shuttle service or are within walking distance. If you hire a car, there is ample parking space but you have to pay a fee. 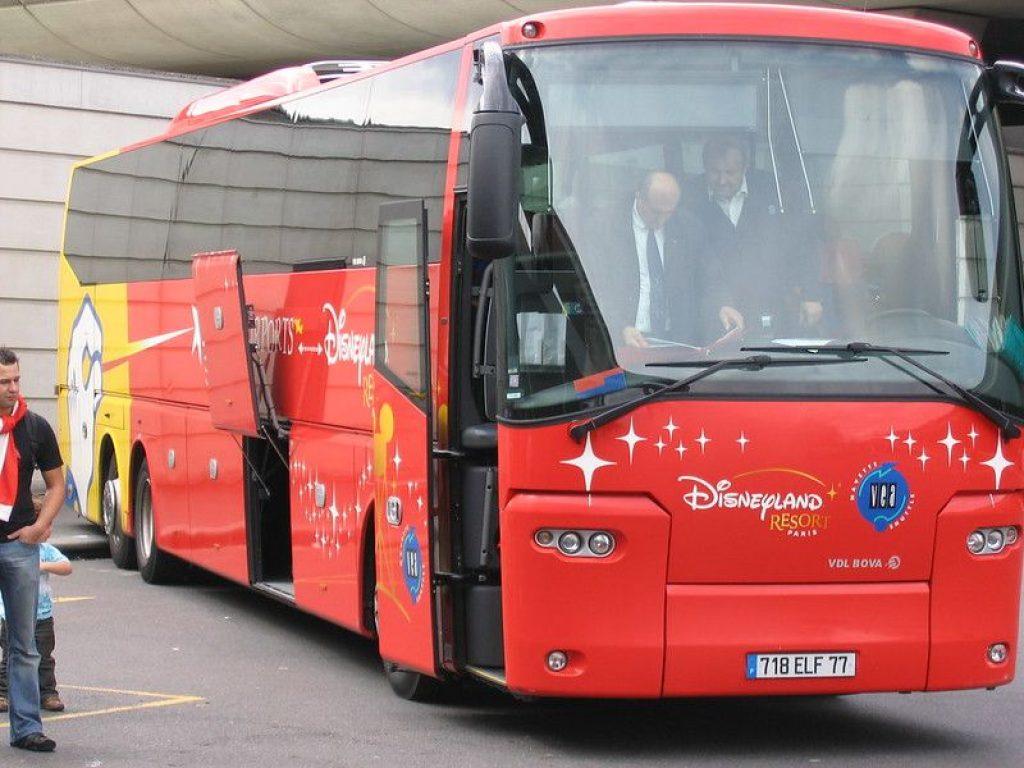 In all honesty, Disneyland Paris is not the kind of place where you go on a day trip. Officially, there’s nothing stopping you from just spending a couple of hours in the park. But, with so many attractions, it’s basically impossible to have a great experience in a rush.

The sooner you accept the need to book accommodation, the sooner you can move on to the good stuff (meeting Cinderella, for example).

Let’s start off with the basics — exactly where is Euro Disney? As the name suggests, it is in Paris, but it isn’t in the city center. Disneyland Paris is about 40 minutes by train from the center of the French capital, in a suburb called Marne-la-Vallée.

Disneyland is at the heart of Marne-la-Vallée, which offers plenty of hotels for visitors. Staying at an official Disney hotel is very convenient, as well as lots of fun. There is always one character in the lobby and you get early entry to the park. However, there are other hotels that are more affordable.

Thanks to the huge variety of Disneyland Paris hotels, there is a hotel for every kind of family! Read on for our favorites. 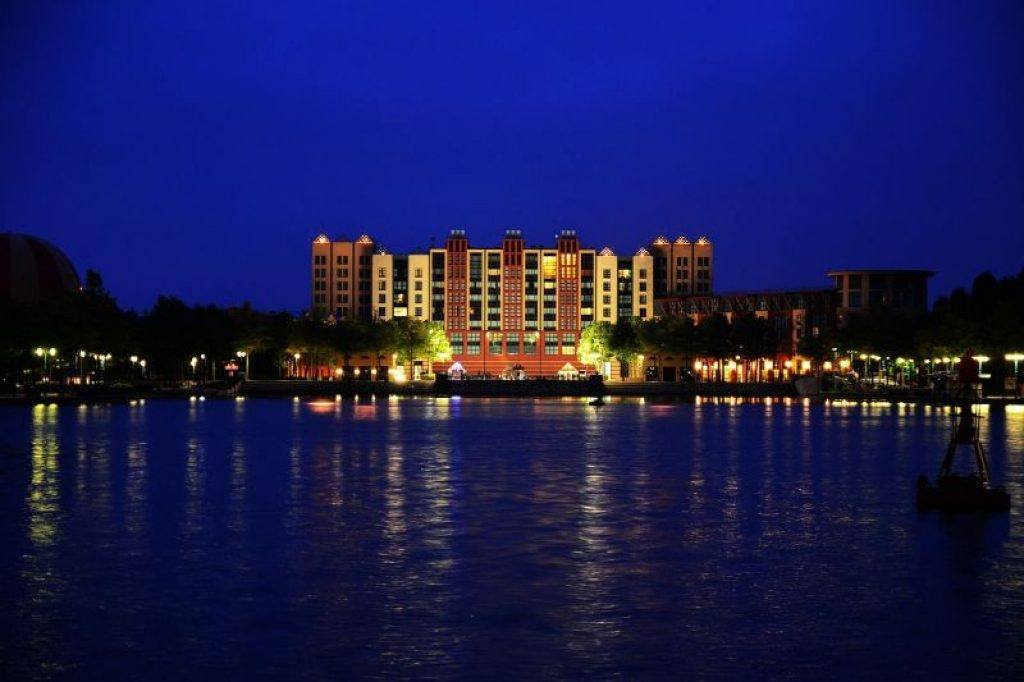 Image by Peter Gülden from Pixabay

If you’re looking to leave Disney, France outside your hotel but still like some luxury, Vienna House Dream Castle is for you. It’s a short, free shuttle ride from the park and offers an authentic French experience.

This four-star hotel is set in a chateau and you can look forward to some great French style here. Meals are of a high standard, as is the in-house spa. The chateau also has extensive grounds that are perfect for energetic children to play in! 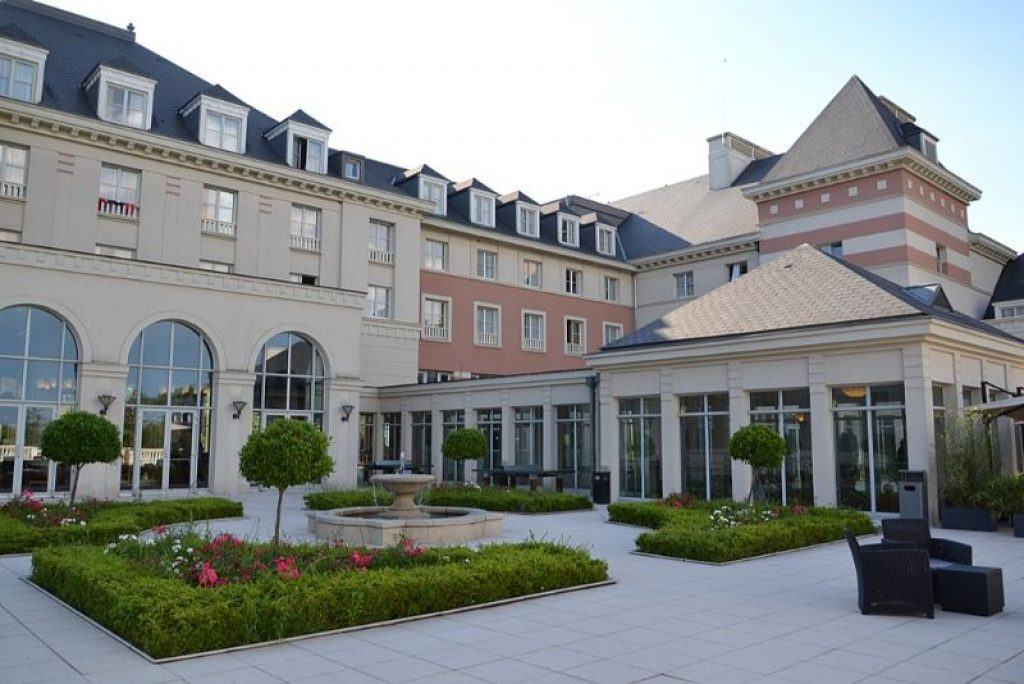 Image by Andrei Dan Suciu [CC BY 3.0], via Wikimedia Commons

This Disney Europe hotel was designed for families on a budget. However, that doesn’t mean that Hotel Cheyenne lacks quality. In fact, it’s styled like a village in the American West.

It’s a two-star hotel, so facilities are a bit more rustic than what you’ll find at the other Disney hotels. However, kids will love the bunk beds and adults can enjoy live music in the Red Garter Saloon.

Explorers Hotel Algonquin is not an official Disney hotel, but it still manages to feel like an extension of Disneyland in Europe! It has so many fun facilities for little ones, in particular.

Children’s rooms are decorated with wallpaper that seems to have come from a Tarzan set! There’s a large indoor play area, as well as a mini-water park outside. What’s more, the delightful hotel menu means even the pickiest eaters will find something to enjoy.

For a truly magical experience of Disney in Paris, you can’t go wrong with this hotel. With Victorian-style architecture and very regal interior design, we’d forgive you for thinking you were a Disney princess yourself.

Disneyland Resort Paris Hotel is a four-star establishment and offers plenty of luxury. Guests can enjoy access to a fitness center, a sauna, and a steam room, as well as a spa, while children have fun with Disney characters in the free childcare facilities.

The best part, though, is that this hotel is right opposite Disneyland Paris itself! 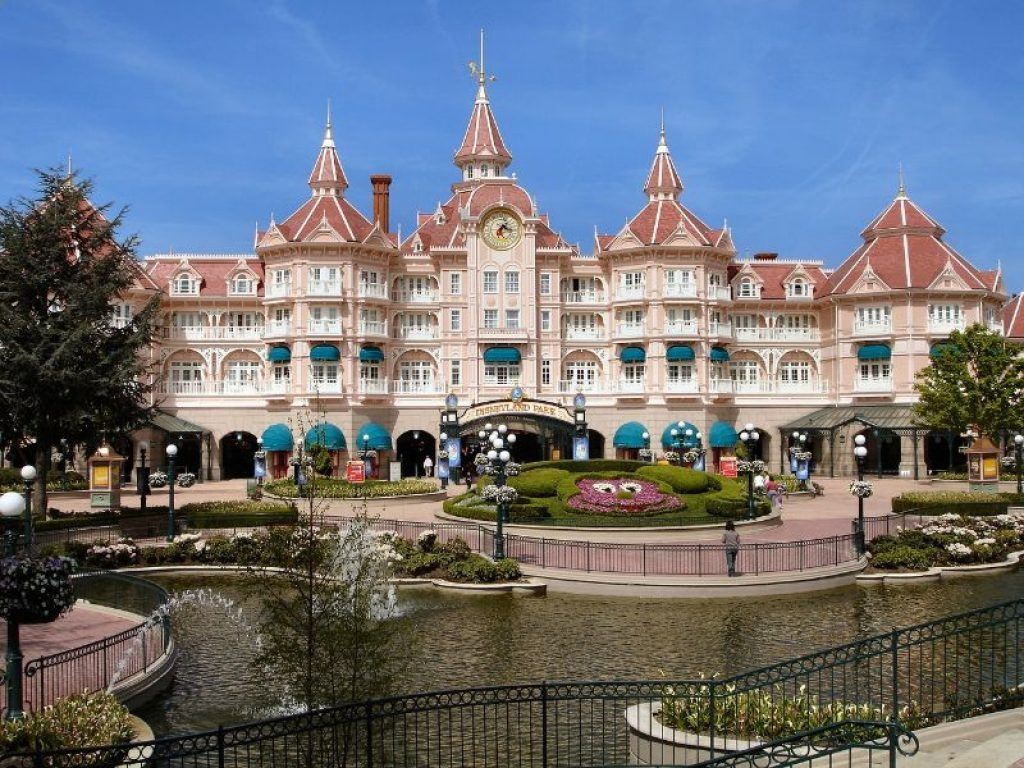 Campanile Val de France is the go-to for families on a budget. It’s outside of the Disney world in Paris but offers a free shuttle service to the park, which is only ten minutes away.

For adults, the rustic decor and neutral colors make it a relaxing retreat from the color of Disneyland. Children, meanwhile, can enjoy a playroom, a video game room, and even a merry-go-round! The evening buffet offers value for money and has great choices for all taste pallets.

The magic of Disneyland Paris captures the heart of both children and adults alike. Sooner or later, you’re bound to find yourself headed for Disney World! Whether you’re a fan of Sleeping Beauty, Tarzan or Mickey Mouse, you can live out your childhood dreams in the park.

From getting to Disneyland, Paris, France, to finding the perfect accommodation, we’ve got the best tips for you. By using our fantastic guide to Disneyland Paris, you can sort out the practicalities of your visit in no time and save your energy for your time in the Magical Kingdom! 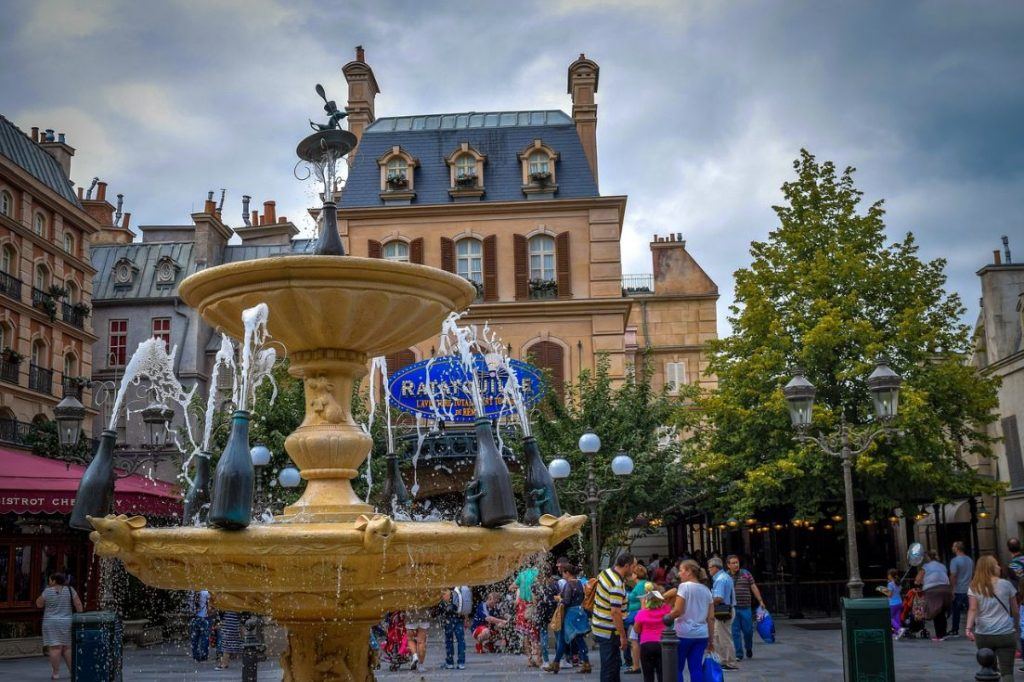 Image by WolreChris from Pixabay

SaveSavedRemoved 0
We will be happy to hear your reviews