Cape Town is in South Africa and is located at the most southern-western point of the African continent. Cape Town and the rest of the Western Cape have a Mediterranean climate that differs from the subtropical climate of South Africa. The Mother City, as it is affectionately called by locals, is capable of experiencing all four seasons in one day.

If you are visiting in January or February, you can expect a dry, hot climate. Summer weather continues into March and early April before autumn and winter begin to bring cold weather and rainfall to the region.

Cape Town weather in February still requires some preparation. It is not uncommon to experience high temperatures, clouds, strong winds and wildfires during this month. Forecasting the weather helps you to look at more than just the temperature expected for the time of your visit.

Read on for information on the temperature, water temperature, wind, rainfall, and sunshine expected during February in Cape Town.

Summer means 61°F (16°C) mornings in Cape Town with the sun rising over the Hottentot Hollands Mountain Range to the East. Locals and visitors make the most of the 6 am sunrise to enjoy the outdoors before the heat of the day, which is usually around 86°F (30°C). 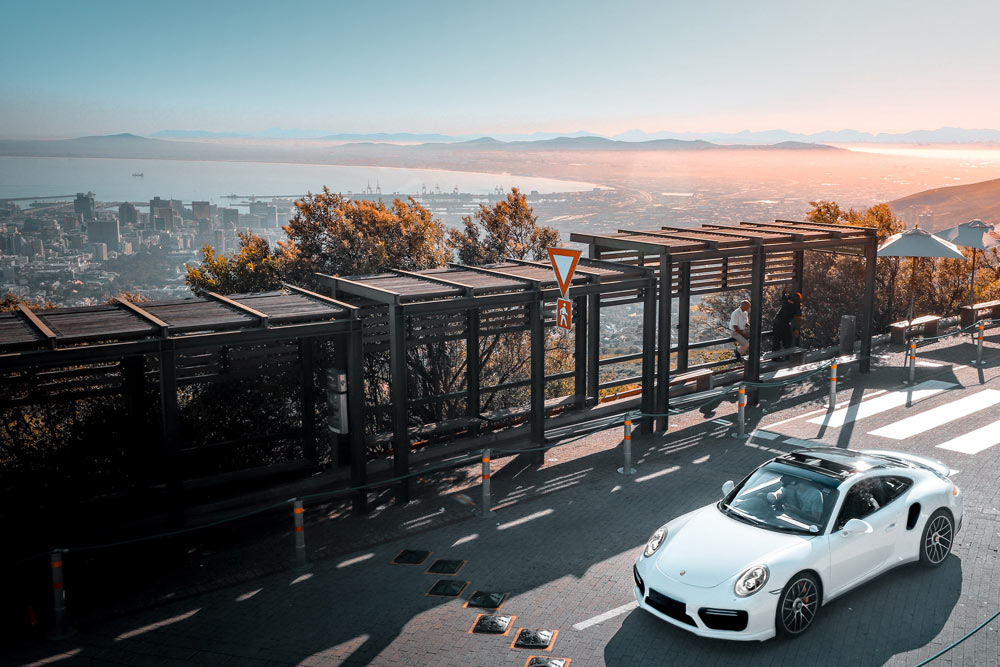 The water temperature in February can be as low as 53°F (12°C). Swell averages 8ft with a swell period of 11 seconds. The dominant wind for February in Cape Town is south-south-east and the dominant swell direction is south-west.

Over the month of February, the length of the days decreases by 55 minutes. And on the first of February, Cape Town experiences an impressive 13 hours and 45 minutes of sunshine. The month starts with a 6 am sunrise and 7:51 pm sunset. 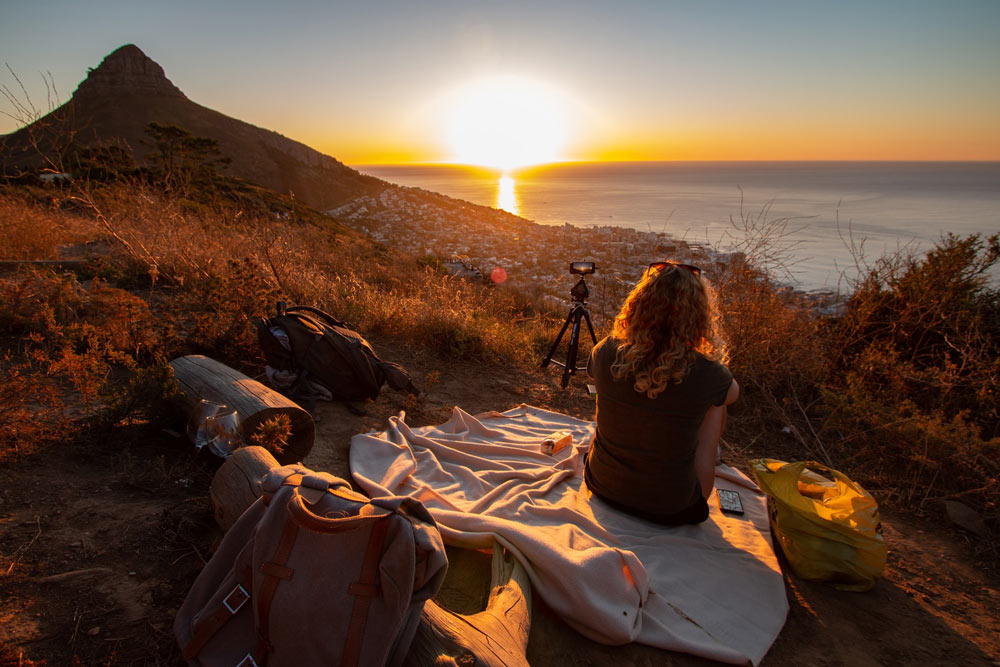 Hot temperatures experienced during February in Cape Town can quickly lead to dehydration. Water is essential to any outdoor activity, and sunscreen should be worn in protection against the harsh UV light. Seek shade from mid-morning through to mid-afternoon.

The average weather in Cape Town over the past ten years has helped produce reliable estimates for the future. Cape Town is not exempt from the effects of climate change. Changes in rainfall have a direct impact on the environment and citizens. The lowest annual rainfall was recorded in 2015 at 403mm and coincided with the hottest temperature in 100 years of 107°F (42°C). 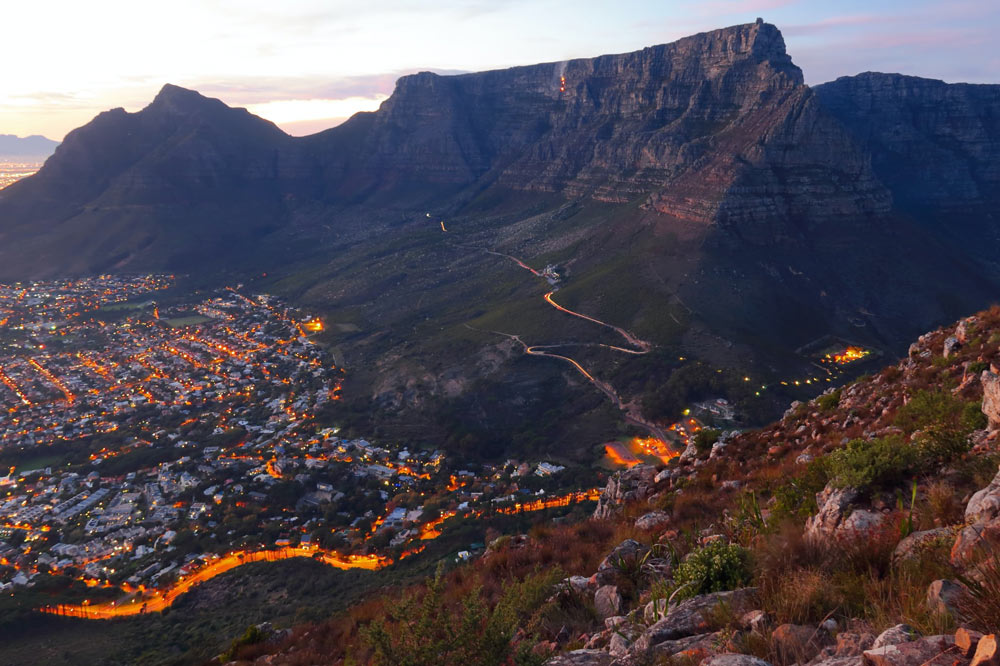 Rainfall is lowest in February despite high cloud coverage. February 2020 experienced five days of rainfall with a total of 16mm of rain for the month. The most rainfall occurs in July, with an average of 15 days receiving 138mm of rain. 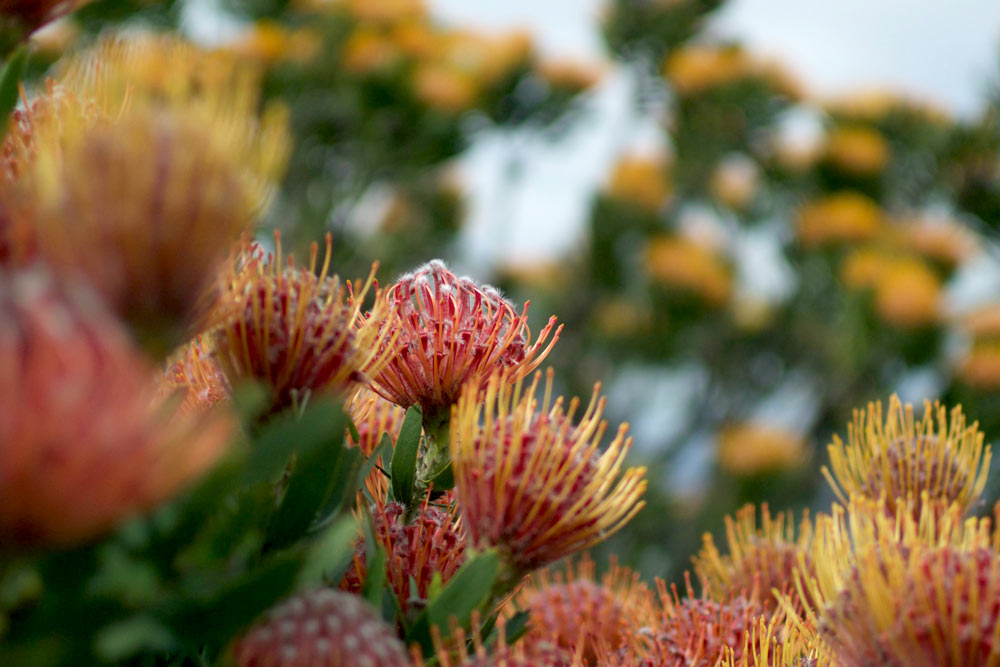 Cape Town yearly weather patterns may change, but the physical environment stays the same. You can get the best out of your time in Cape Town by traveling to the location, which will be best suited to the conditions. 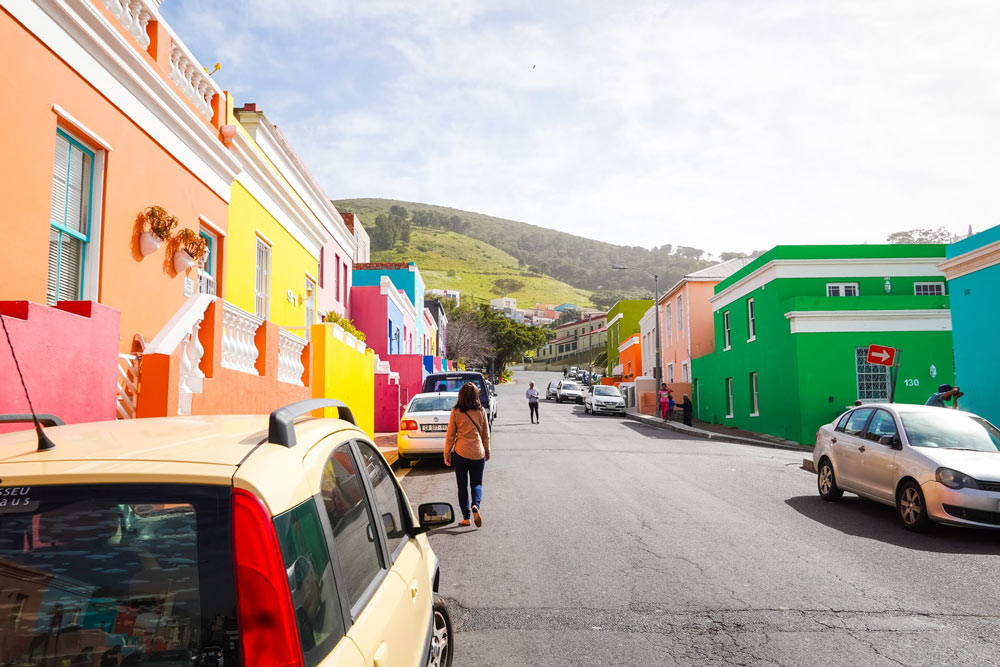 The south-easterly blows predominantly in Cape Town during summer. Find protection from the strong wind on the Atlantic side of the coastline. Winter has strong storms that blow in a north-westerly direction and bring rain.

Cape Town’s beaches can vary in surface temperature. The popular sun tanning beaches of Camps Bay and Clifton experience between 55°F (12°C) and 70°F (20°C) during the month of February. Despite the temperature staying below 70°F (20°C) throughout the year, people still embrace the cold water for a swim. 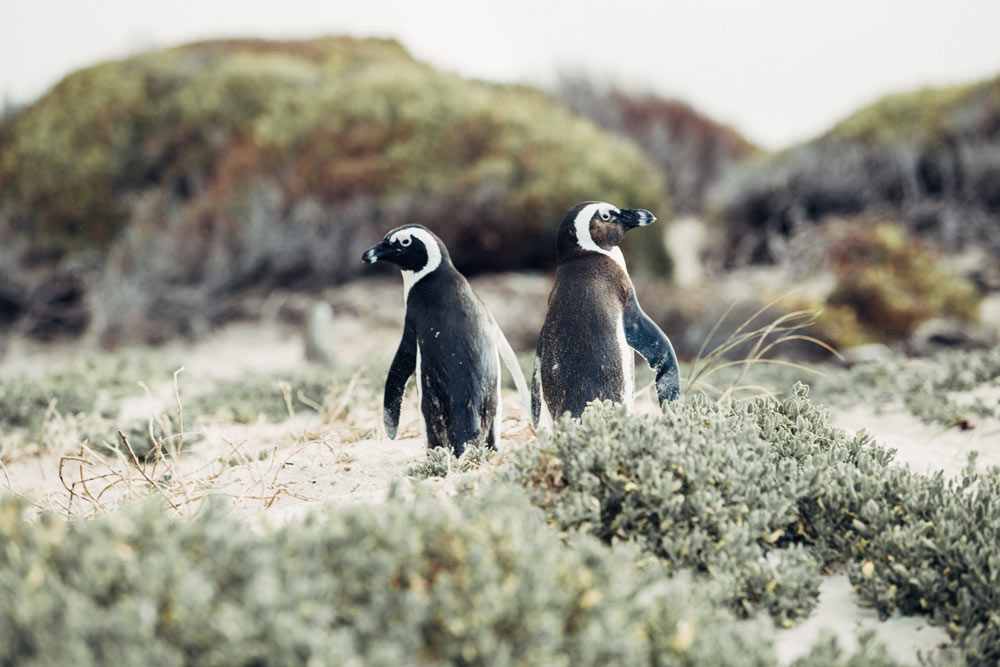 The Atlantic ocean can be considerably warmer within False Bay. The shallower and protected waters are between 61°F (16°C) and 71°F (22°C) in February and are coldest in July at 55°F (13°C).

Weather in South Africa in February

The country covers a large surface area of 1 219 602 km2 and has a high altitude interior plateau. South Africa’s coastline of more than 3000 km helps produce a temperate climate with the interior areas at high altitude remaining dry. 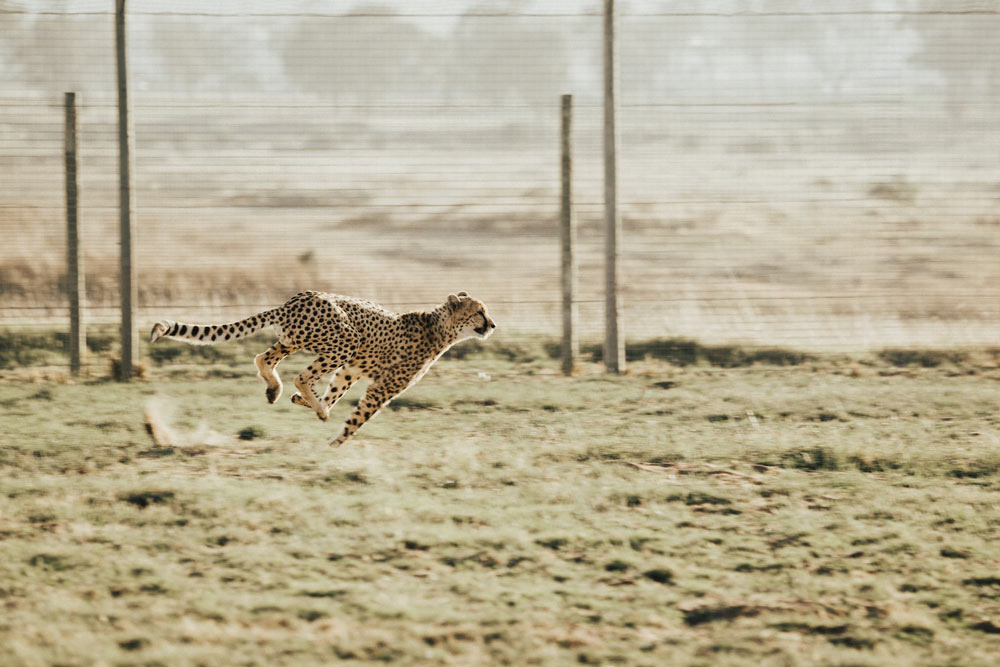 Temperature in South Africa in February

The temperature in South Africa in February is different depending on your location:

Cape Town lies at 24m above sea level and experiences hot, dry weather through February, with temperatures reaching a high of 86°F (30°C) and a low of 64°F (18°C)

Johannesburg is located at 1694m above sea level and typically experiences a high temperature of 77°F (25°C) and a low temperature of 57°F (14°C) during February. 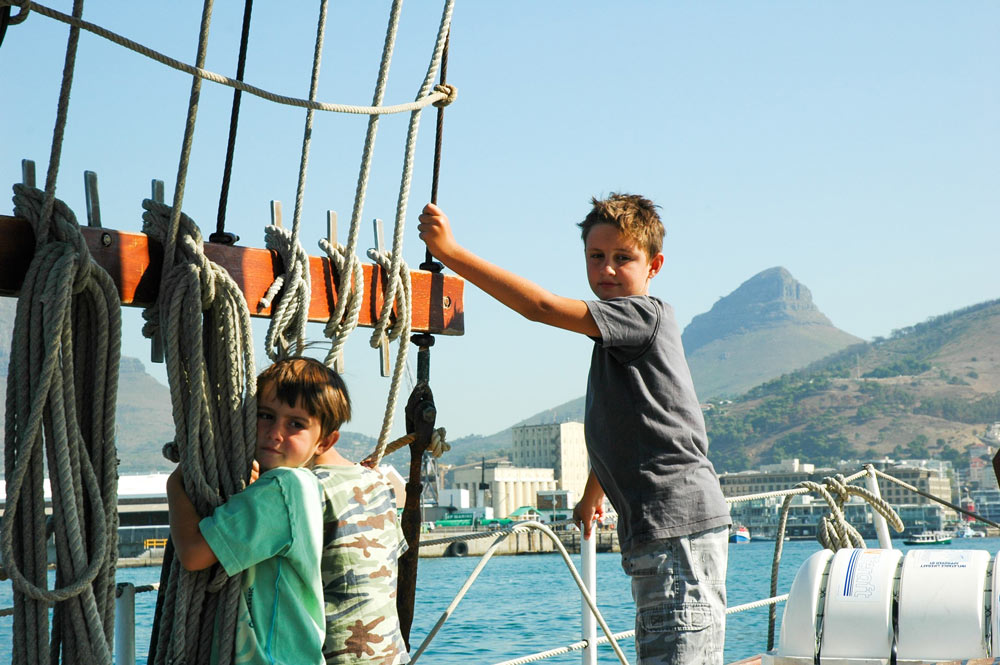 Final Thoughts on Weather in Cape Town in February

The weather in Cape Town in February is hot and dry. You can expect five days of cloud cover with a total of 16mm of rain spread across them. The south-easterly wind and the strong sunlight are worth protecting yourself against by finding cover on the Atlantic side of Table Mountain.

We hope you feel more confident about the weather you can expect in February in Cape Town. Remember to enjoy the early morning sunlight and seek shade during the afternoon.

Plus, the weather in February will give you ample opportunities to experience sunset spots in Cape Town.