Best Beaches in South America | A Guide Along the Coastline

All those beautiful beach pictures that you keep losing yourself in, saved on your computer desktop are 100% real. Yes, we know that you’ve been spending your lunch hour staring at your screensaver trying to figure out where in the world that clearwater beach is. Well, you can finally stop daydreaming because that computer wallpaper exists- in South America.

Don’t panic. If you haven’t done any squats in the last couple of months, it’s not a South American prerequisite to wear a thong bikini on the beach (although it’s not frowned upon either). To your delight or dismay, the Rio de Janeiro Carnival is not all year round so you can relax without the booty-ful pressure on some of the best beaches in South America.

In this guide, we’ll share with you some of the nicest beaches in South America that will leave you wanting to extend your stay. Some of these Latin beaches are popular tourist attractions and others are hidden gems of the continent. Whichever beach you choose to catch a tan on, you’ll finally turn that 2D image of paradise into a reality. 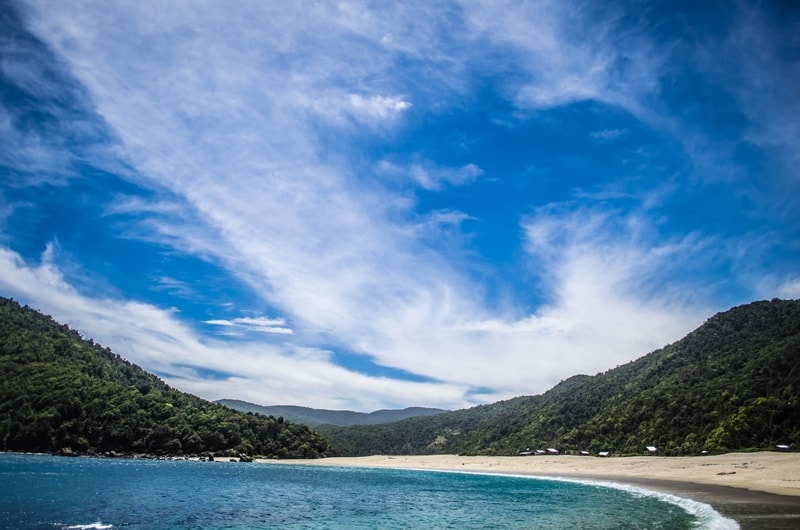 South America is filled with heaps of Latin culture in different Latin American coastal cities that are a guaranteed must-see. From Brazil to Venezuela and everywhere between Paraguay and Argentina, it would be a waste not to skinny dip (at your own risk) at the many beaches of South America.

Located south of the famous Rio de Janeiro, Prainha is surrounded by lush green rainforest and the Atlantic sea. Surfers call this one of the best beaches in the south and you’ll find most of them there, riding those bottle-green waves. For those of you who are less ‘Sporty Spice’ and more of a ‘Posh’ or ‘Baby Spice’, don’t worry – there are plenty of bars and restaurants that overlook the sea. 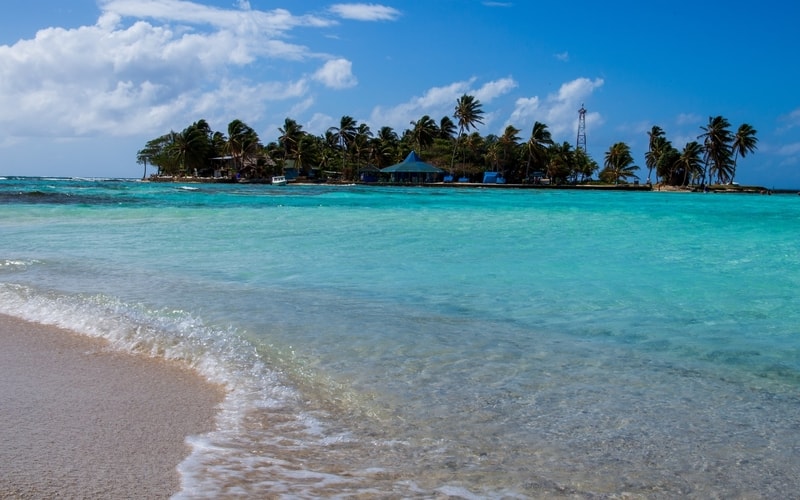 San Andres is a tiny South American beach resort that resides in the Caribbean Sea off the Nicaraguan coast. This spot of paradise is too small for an airport but still pulls in a large number of tourists during the high season (December- March). Have you ever seen ocean water this clear? The sand here is soft and white and once you visit this tranquil nook, it’ll be like stepping into a postcard.

Punta Del Diablo has become a popular beach destination in South America because of its low-key and hippie, bohemian vibe. Even Argentinians and Brazilians are known to cross the border to visit the beach town and the Uruguay bars that surround it.

Punta Del Este, also in Uruguay, is an honourable mention, as this beach is the more popular sister to Punta Del Diablo. Punta Del Este is a cosmopolitan district and its beach has been known to have a couple of celebrities sunbathing on its shoreline.

Punta Del Este has avenues full of boutiques, restaurants, museums and art galleries. So whether you’re in the mood to go whale-watching or start your career as paparazzi, Uruguay caters to both. 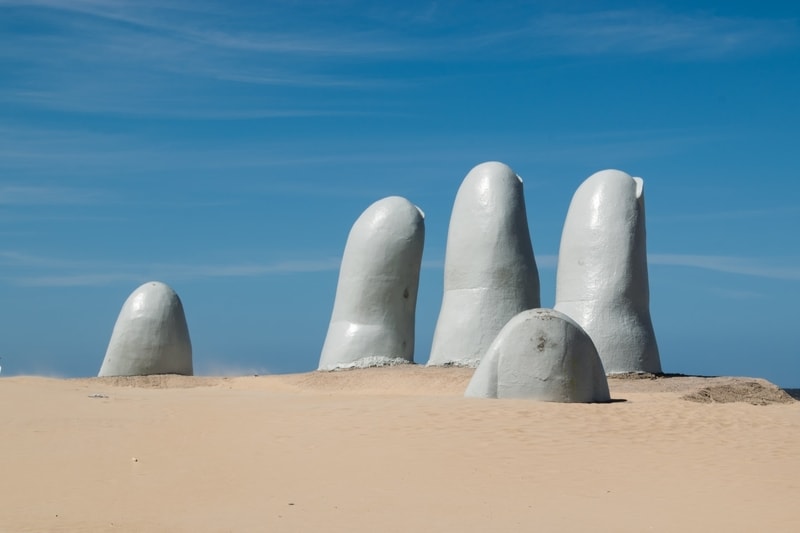 What is paradise without a couple of palm trees in it? El Cabo San Juan is nothing short of a fantasy, located in Colombia’s Tayrona National Park. It’s one of the most beautiful beaches in South America because of its undisturbed sense of utopia. To be part of its magical aura, you’ll have to endeavour a two-hour hike before baptizing yourself in the clear blue ocean.

Now if you were looking for a private island but you haven’t quite made it onto the Forbes list next to Richard Branson, it’s ok. Lopez Mendez in Ilha Grande, Brazil is sure to give you that same private island feeling. With palm trees framing the white sand beach that stretches for 2 miles (3km), there isn’t one skyscraper in sight. Just you and that crystal blue South American sea. 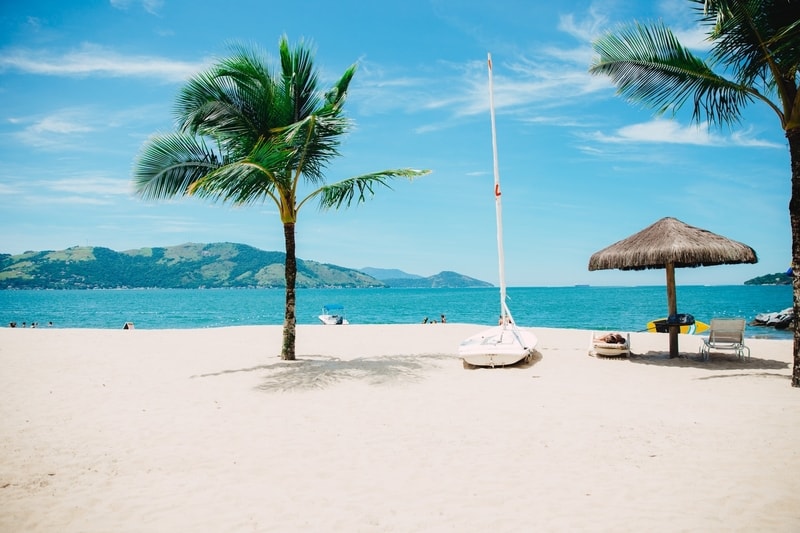 Venezuela is the country where most ‘Miss Universe’ pageant queens are born and raised. And now it seems it’s also the country where the universe will be spending their South American beach vacations. Los Roques is exactly as advertised. White sand and clear blue seas with lots of activities to choose from. Venezuela is really showing off with this world-class gem.

Northwest of Peru, lies the beach town of Mancora. Made popular by kite surfers and kite flyers alike for its salty Pacific breeze, the town sits sandwiched between desert on one side and sea on the other. With a host of open-air restaurants along the seaside strip, Mancora also attracts a swarm of partygoers after sunset so if you’re looking golden brown after the beach, we’d suggest showing it off on the dancefloor. 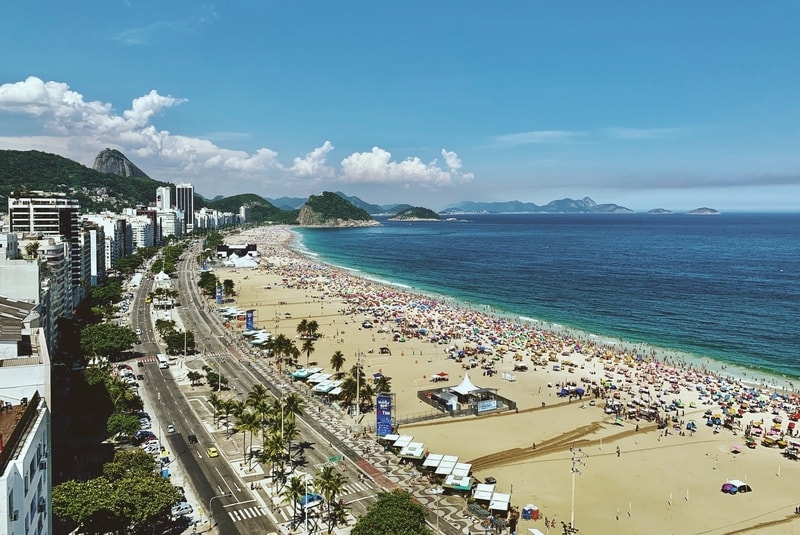 If you read this name and didn’t start singing Barry Manilo’s hit Copacabana, we won’t be upset- just disappointed. But just like the iconic 80’s hit song, Copacabana has still got the ‘it’ factor. Famous for its crescent moon shaped beach that stretches for miles and its lively party scene after dark, it’s no wonder why Copacabana is one of the best beach towns in South America.

Who knew that paradise island wasn’t just part of ABC’s The Bachelor franchise? The most beautiful beaches in South America are not just the ones we shared with you on this list but also the ones that only the locals know about. So get ready to set on an adventure either way.

Latin America has the key to unlock all your beach vacation dreams, now it’s up to you to stop dreaming it and start sunbathing in it instead.