Last updated on February 6, 2023 4:03 am
Add to wishlistAdded to wishlistRemoved from wishlist 0
Add to compare

Have you ever wanted to fly over one of America’s greenest cities in a helicopter? Portland is famous for its parks and gardens, like the Japanese Garden, and its eco-friendliness. There are many microbreweries and coffee houses scattered around the city, too.

Portland is situated along the Columbia and Willamette rivers and enclosed in forests of evergreens. Snow-capped Mount Hood sits behind Portland and is an impressive addition to the city’s skyline.

It is obvious that Portland is a city worth seeing, but is it possible to take in all the sights in just one visit? The answer is in this article.

Portland: Private Columbia Gorge Air Tour
This introductory air tour is a great way to get a taste of the amazing Columbia River Gorge at a very affordable price. Fly above the Columbia River between the ascending cliffs of the Gorge with views of the river, Mt. Hood, Latourell Falls, and more!
$30.00
Available

Downtown Portland Airplane Tour
Get stellar views of downtown Portland from inside an airplane with this aerial experience for up to three passengers. You'll fly over iconic sights such as the Portland, Oregon sign, the Moda Center, the Rose Quarter, and Providence Park, with the chance to take aerial photos of downtown...
$99.00
Available

Portland: Columbia Gorge Waterfalls 40-Minute Scenic Flight
Take an air tour of Oregon's Columbia River Gorge. Get a different vantage point of this natural wonder. Fly over the world-famous Multnomah Falls, between the Gorge Canyon, and past Bonneville Dam.
$209.00
Available

Amazing Columbia River Gorge & Portland Air Tour
See Portland and the Columbia Gorge in a way that not many people get to: from aboard a private plane. Your pilot will fly you right over Portland, along the Willamette River to Oregon City and onwards to the Columbia River Gorge, one of the prettiest natural areas in the state. Once in the...
$279.00
Available

Private 40-minute Waterfall Air Tour for Three
See Oregon’s infamous waterfalls from above on a private airplane tour through the Columbia River Gorge. Get 360-degree views as you soar over the Vista House, Booneville Dam, the Bridge of the Gods near Cascade Locks, and more. This private experience allows you to customize your itinerary to...
$359.00
Available

Oregon Helicopters has 8 different tour options for Portland. All of these tours depart from Portland’s Downtown Heliport – 33 NW Davis, Portland OR 97209.

This is the best option for first-time fliers and for those who are on a tight schedule. See most of Portland, including the Willamette River, Portland’s skyscrapers and all the downtown bridges. All this for as little as $55 dollars makes this the cheapest option, too.

The tour follows a 6-mile loop of downtown Portland and lasts approximately 7 minutes. Make sure to get to the heliport a few minutes early (around 10-15 minutes before your flight) in case of delays in weather or sudden changes to the flight plan. And don’t forget to bring a camera! 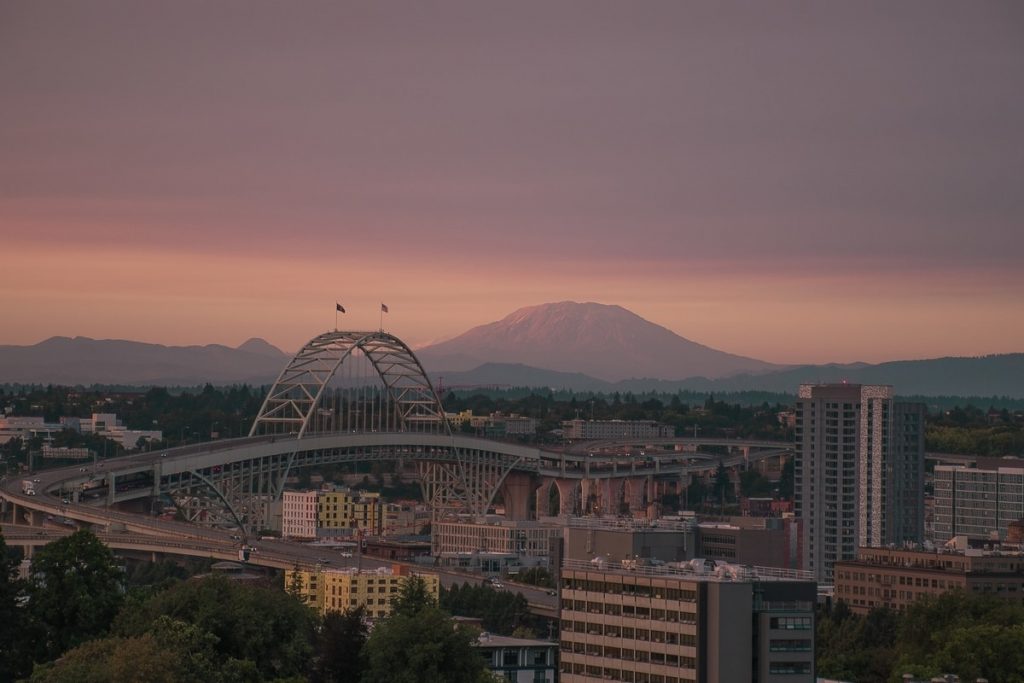 Portland is nicknamed the ‘Rose City’ because of its many gardens. There is no better way to view the gardens and parks of the city than with this City Parks tour. See more than 6 parks, including the Japanese Garden and Forest Park, for $75.

Parks are not the only thing you will see on this tour; there are plenty of other sights to enjoy. On this 10-mile (approximately 10 minute) trip you will be able to see many landmarks. Pittock Mansion, Oregon Health & Science University with their tram to the waterfront, and the Willamette River are some of the landmarks you can see from above.

Do you want a tour of the city that blends seamlessly into your other downtown Portland activities? Then this tour is perfect. You see all the best landmarks on this tour for only $99 per person. It’s easy to see why this is also their most popular tour – so book in advance!

Take off from the heart of downtown on a 15-mile ride and get a birds-eye view of the skyscrapers and bridges (including St. Johns Bridge). Then head off toward Willamette River and catch a glimpse of Forest Park and the Tualatin Valley.

Make sure that you arrive nice and early (approximately 30 minutes before flight) to leave ample time for taking pictures and getting briefed about the tour. 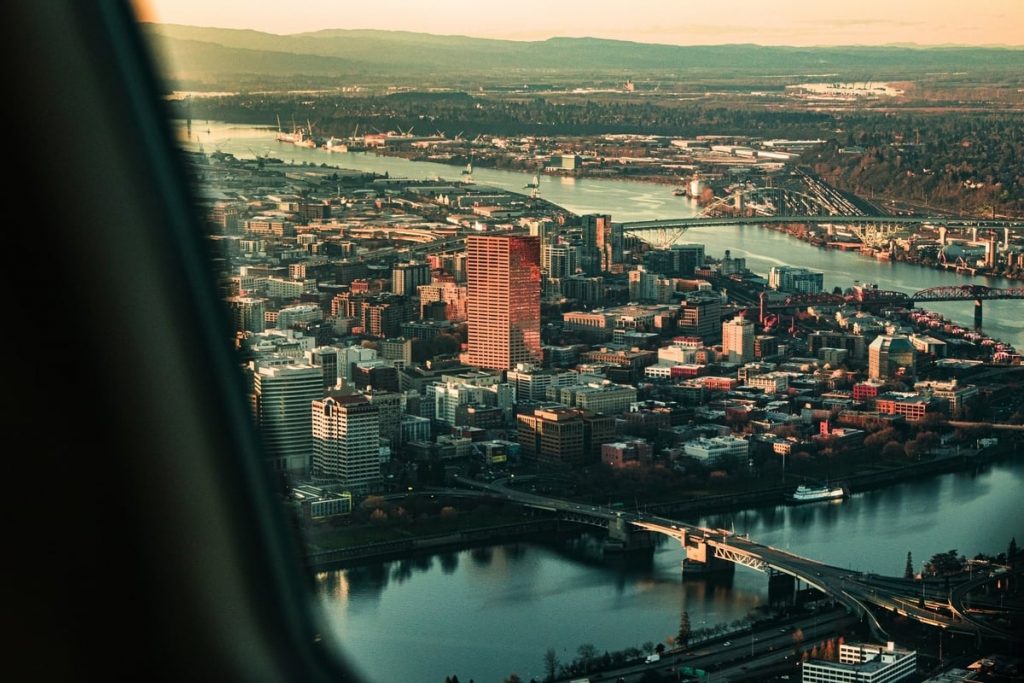 This is the most unique tour of them all. Get above the city of Portland at night and see the city lights and surrounding hills lit up by car headlights. You can choose to do a 15-mile (15 minute) or 35-mile (30 minute) tour of the city.

This is a great tour for any nature lover. You will be able to see lakes, rivers, waterfalls and snow capped mountains, not to mention wonderful views of the city. This 20 minute flight covers 25 miles and costs $149 per person.

The star of this trip is Willamette Falls. In terms of volume, it is the second largest waterfall in the United States. On top of that waterfall lies the historic Oregon City. This was the end of the famous Oregon Trail and the capital of the Oregon Territory long ago.

Looking for the ultimate romantic helicopter ride? This is it. This tour is designed for couples and it is the only private helicopter tour. The helicopter is staged with a dozen roses and a box of locally-made chocolates is included, too.

There are three options to choose from: 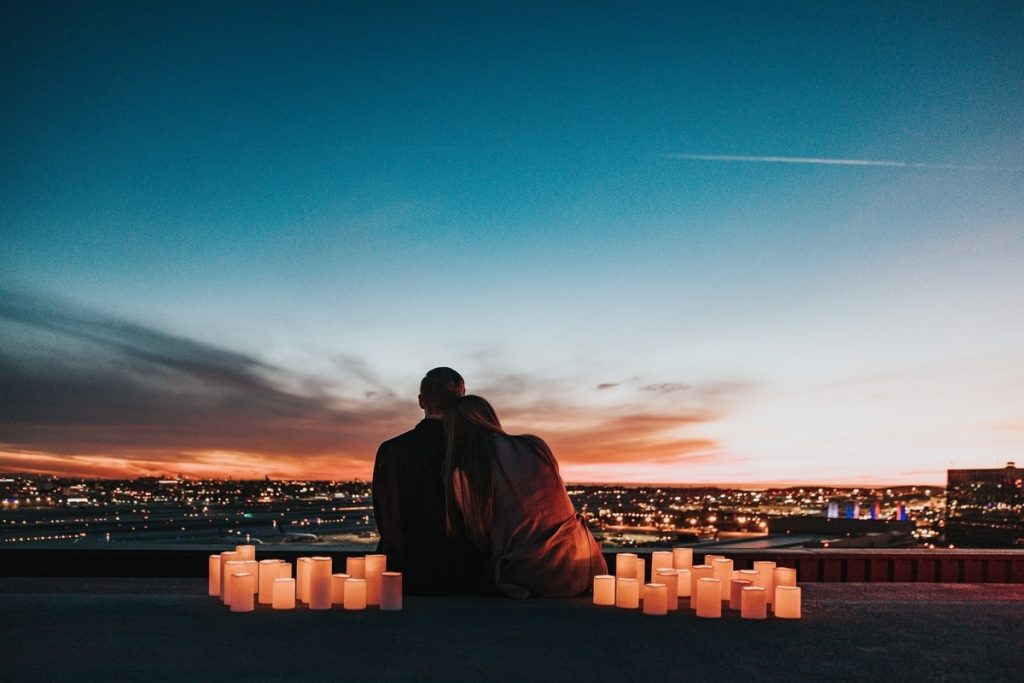 What Are the Best Helicopter Tours in Oregon?

Oregon has many places that are worthy of an aerial view. For starters, there is the entire coastline which is over 500km’s long. It boasts pristine beaches with lots of misty cliffs and jagged rocks that stick out of the ocean.

When you go further inland, you notice it’s a very green place with lots of furs and pine trees. And then it turns into a desert. Portland is the biggest city in Oregon and it lies within the green part. It is a great base for exploring the best parts of Oregon. 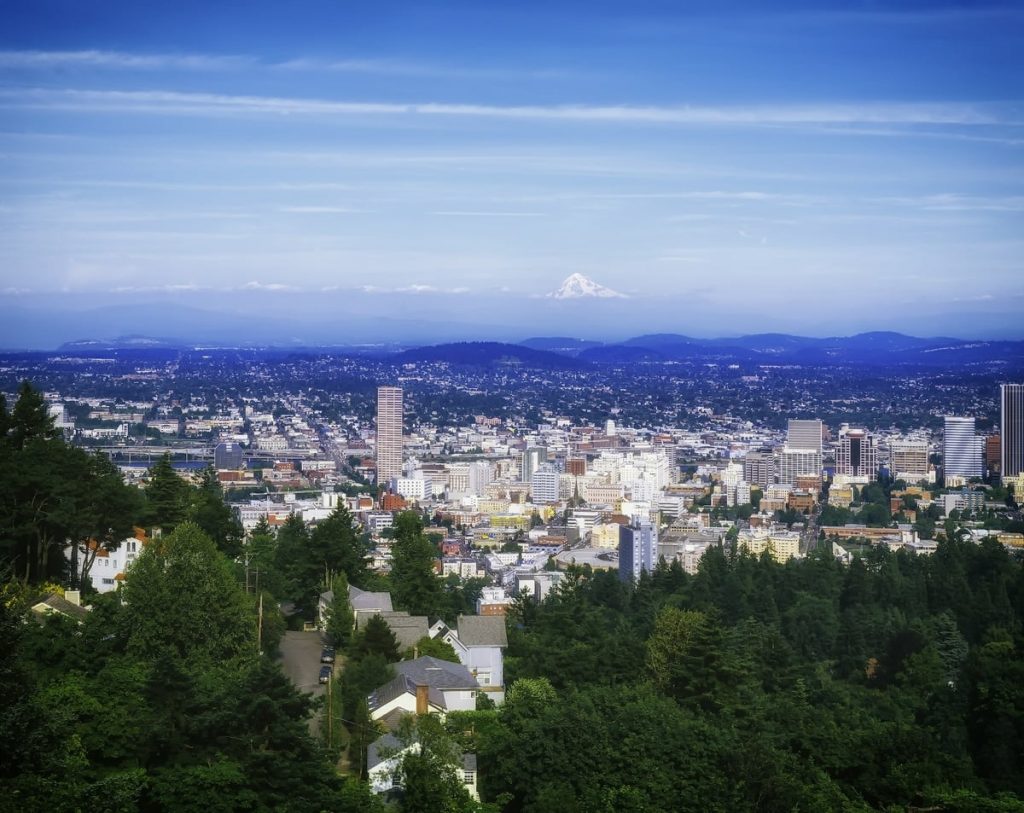 When it comes to helicopter rides in Oregon, Oregon Helicopters has you covered. They have tours in Portland (including Hilsboro), Columbia River Gorge and Mt. Hood. The Mt. Hood tour is a once in lifetime private picnic that takes you to one of the foothills near Mt. Hood.

There are a number of tours to choose from in Columbia River Gorge. You can choose to do the Beacon Rock Gorge, Eagle Creek Gorge, Gateway to the Gorge and Heart of the Gorge tours.

Choose the Right Helicopter Tour for You and Enjoy!

It is clear that Portland is a bucket-list destination for any traveler. Oregon Helicopters provide many options to experience Portland through a birds-eye. The most popular and best value-for-money tour is the Downtown Portland tour.

Remember that there are deals running on helicopter flights all year round. Black Friday is a great time to buy helicopter tour tickets on sale.

Sex and The City Tour